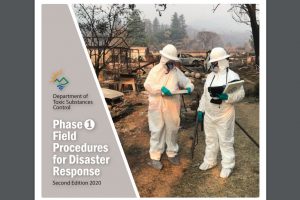 Late Friday, Tuolumne County Office of Emergency Services (OES) released the public notice for that work to be done. In the release, they cited Governor Gavin Newsom’s state of emergency proclamation announced last week to support counties recovering from several wildfires, including Tuolumne County due to the Washington Fire, for getting the ball rolling. Click here to view the proclamation.

The proclamation enables the county and city to access resources under the California Disaster Assistance Act to bolster their recovery efforts, supports impacted residents by waiving fees to replace documents such as driver’s licenses and birth certificates, extends consumer protections and streamlines and expedites the removal of ash and debris, among other provisions, according to county OES officials.

Also outlined in the notification was phase one of the plan for impacted property owners. It instructed, “The city/county will join the California State Department of Toxic Substances Control (DTSC) and its contractors as crews inspect your property and remove any household hazardous waste that may pose a threat to human health, animals, and the environment such as batteries, asbestos siding, and paints. This phase is mandatory under local emergency declarations.”

Crews will be on-site starting Monday, Nov 1. OES relayed that state contractors and a Hazmat team will first assess the potential for household hazardous waste and then remove all of it within the Washington Fire. Click here for specific details on that removal and here to view the phase one plan.

OES officials also provided these examples of household hazardous waste that will be removed:

The release also asked for property owners’ and the public’s assistance in allowing phase one to run smoothly. “It is important that folks do not impede the removal of the household hazardous waste. The sooner this can be cleaned up, the sooner we can move to the debris removal or Phase Two,” urged county OES officials.

Questions regarding the cleanup process can be directed to Tuolumne County OES at 209-533-6395 for properties located in the unincorporated Tuolumne County burned area. For areas within the City of Sonora, contact Sonora City Administration at 209-532-4541.