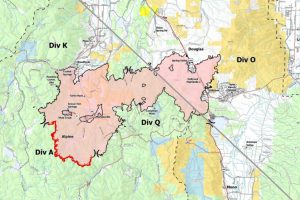 The blaze was ignited by lightning on July 4th, and burned 68,637 acres, as reported here. Since late August the containment was stalled at 82 percent. Forest Fire officials cited that “the remaining 18 percent was in extremely rugged terrain and being actively managed for confinement using natural barriers until a season-ending weather event occurred.”

Visitors can go back into the area on Oct. 31 when the Tamarack Fire Area Closure order expires, but caution in the burned area is still advised.  Smoke may still be visible occasionally from “large-diameter trees and stump holes smoldering in the fire area,” according to forest fire officials. They add that other dangers include fire weakened hazard trees, loose rocks/debris on steep slopes along with sedimentation flows, and increased runoff. The public is urged to note and heed signage warnings of potential hazards.

Additionally, repair and rehabilitation work within the burn scar will continue for quite a while. The fire garnered national attention when a little bear cub was found with burnt paws and taken to a wildlife rescue. He  subsequently escaped, sparking a massive search, as detailed here.