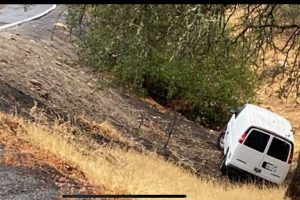 Van slides off roadway during rain

Sonora, CA — Due to the lingering drought, it’s no surprise that drivers may need a refresher course on driving in wet conditions.

To the rescue is the CHP and SPD offering tips on staying safe while out on the roadways especially with an atmospheric river possibly bringing flooding and winter storm watches forecasted to hit the region by the National Weather Service, as reported here. Those conditions bring slick roads and poor visibility.

Sonora police remind the public, “The first few rainfalls of the season create especially slippery roads as water mixes with the oils and other deposits that accumulate during the dry season.”

Certain roadways can become dangerous in these conditions if drivers do not slow down. One of those areas is on O’Byrnes Ferry Road at the George Reed Rock Plant Road intersection in Jamestown. The CHP reports the roadway curves and then descends. If a driver is going too fast, they can hit water and hydroplane. That is exactly what happened during Friday’s downpour, according to the CHP. Also, watch out for standing water on roadways, as it can cause hydroplaning.

One law to remember when driving in rainy/snowy conditions is detailed by CHP spokesperson Steve Machado, “If the daylight is still bright enough to where it won’t activate your headlights. Then you’ll have to manually turn your headlights on. It is the law that if you have your windshield wipers on that your headlights and taillights should be on.” He added just having the daytime running lights on does not work under the law as the vehicle’s taillights will not be illuminated.

These tips are offered to help keep safe on roadways: