Rainy Days Ahead For The Mother Lode 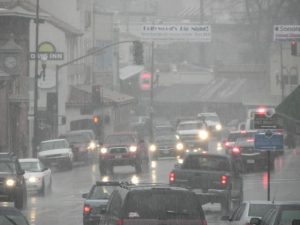 Periods of moderate to heavy rain are expected this morning. Potential rainfall rates will be over a half inch per hour.

The snow levels will be high.

An intense, prolonged band of precipitation with moderate to heavy rain at times will move through between late Saturday night through Monday evening.

The total snow accumulations will range from one to three feet above the 6,000 foot elevation.

The winds could gust as high as 45 mph.

Periods of heavy snowfall and gusty winds will create hazardous travel conditions. Significant reductions in visibility are possible. Tree branches could fall as well. Travel could be very difficult to impossible. Expect mountain travel impacts such as chain controls and travel delays.

A Winter Storm Watch means there is a potential for significant snow, sleet, or ice accumulations that may impact travel. Continue to monitor the latest forecasts.