Extreme Heat Caused The Deaths Of A Mariposa Family 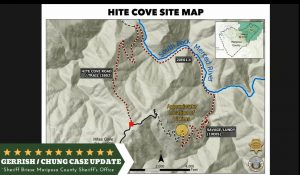 Mariposa, CA – Mariposa County Sheriff Jeremy Briese reported his office has determined the cause of death of a family found on a hiking trail in Mariposa. The family all suffered hyperthermia and probable dehydration due to environmental exposure. John Gerrish, Ellen Chung, and their one-year-old daughter Miju in a backpack with Aussie, the family dog, went on a hike on Sunday, August 15th on a day that started out at 74 to 76 degrees but heated up to 92 to 99 degrees by 10:30am and was 107 to 109 by 12:50pm. The extreme heat was made worse due to the area having little shade along the approximately 8-mile hiking trail at is in the footprint of the 2018 Ferguson Burn Scar (96,901 acres). The family was found in the Devil’s Gulch area in the Southfork of the Merced River drainage. Sheriff Briese stated that heat-related deaths happen in other areas of California but none like this have happened in Mariposa County as far as he knew.

Relatives of the family expressed their thanks to the Mariposa County Sheriff team for their thorough investigation in a letter that was read at the press conference. The investigation identified a specific app that was used to locate the trail on Saturday, August 14th. Other than some snacks and a bottle of baby formula the only water the family brought with them on Sunday was a single 85-ounce CamelBak. The specific app they used did not indicate the significant change in elevation of the trail. The 8-mile loop begins on a hill at 3,800 feet where the family’s car was located and descends to 1,800 feet into a river drainage.

Tests on residue in the 85-ounce water bladder determined it was tap water and not river water. Toxicology tests were negative for drugs. The Merced river was tested in the area and on September 3rd and the Burea of Land Management closed a stretch of the Merced River in Mariposa, between Briceburg and Bagby, after toxic algal blooms were found.

The family was reported missing on the Monday night of August 16th at 11 pm. Their bodies were discovered by search and rescue Tuesday morning at 9:30 a.m. The specific cause of death of the 8-year-old dog named Aussie is unknown but believed to also be due to heat-related issues. A local mine was searched but no evidence was found to indicate that the family had visited the site.

Sheriff Briese thanked over 30 agencies including the FBI cyber division which has Gerrish and Chung’s cell phones and are still being looked at for information. The area does not have any cell service. Other agencies assisting in the investigation were the Mariposa County GIS, California Public Health, NOAA agencies, Central Vally Toxiclogy, the Department of the Interior, CA Crime Scene, USFS Recreation and others.