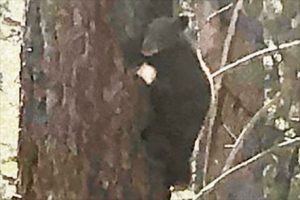 Tamarack spotted clinging to a tree in Tahoe area

Sonora, CA – The photo in the image box is the bear cub Tamarack whose paws were badly burned in the fire of the same name burning in Alpine County, according to wildlife officials, who add it is a good sign for several reasons.

The bandage on one paw can clearly be seen in the photo. On Tuesday, the black bear cub had tunneled under an electric fence at the Lake Tahoe Wildlife Care center in south Tahoe where he was being treated for his burns and escaped into the nearby woods, as reported here. On Wednesday wildlife officials requested the public’s help to find him. The very next day, flooded with bear sighting calls, the center asked citizens to only call if the cub was in their sights, as detailed here. That is exactly what some eagle-eyed hikers did when they spotted the injured cub hugging a tree in the Tamarack Fire area.

Acknowledging that “they’ve been following up on several reports over the past two days regarding sightings of the cub, center officials disclosed, “He is still too small to survive long term in the wild,” but they are “optimistic he can be rescued a second time.” Wildlife officials also advised that the photo was encouraging for a couple of reasons. They elaborated, “He is alive. Clearly, it illustrates that he is able to climb trees, which is his natural safety mechanism, and he remains in the South Lake Tahoe area.”

The center released the photo but is keeping his “location secret until the injured cub is brought to safety.”