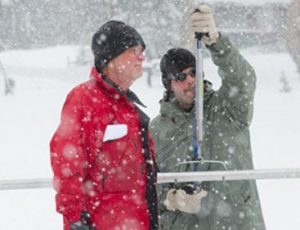 Sacramento, CA — The snowpack got a boost by the late-season storms, but it remains far below normal as the spring melt approaches according to state water officials. Today’s manual snowpack reading by the Department of Water Resources (DWR) shows the statewide level at only 32% of average water content for the date. “We’re already seeing farmland fallowed and cities scrambling for water supplies,” said DWR Director Mark Cowin. “We can hope that conditions improve, but time is running out and conservation is the only tool we have against nature’s whim.” March was above the monthly average, but the DWR says it was no “miracle.” The electronic readings found that the water content in the state’s Northern Mountains is 23%, Central Sierra (includes the Mother Lode) is 38% and the Southern Sierra is 31% of normal. The DWR says 2014 is on track to be the fifth or sixth driest year on record. The year’s last snow survey will be May 1. That is when that final ranking will be determined.