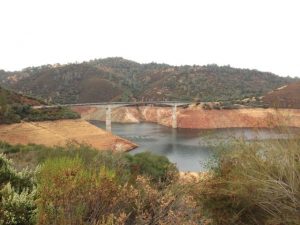 <p>Sacramento, CA – The Bureau of Reclamation’s Central Valley Project released new numbers for area Reservoirs. They note that California’s historically low precipitation in 2013, meant minimal reservoir inflows and early reservoir releases to manage the Delta’s salinity. The Central Valley Project (CVP) states, “January through May 2013 were California’s driest in about 90 years of recordkeeping.”<br></p>
<p>New Melones Reservoir has a capacity to store 2.42 Million Acre-feet and is reported at 41% of capacity. That is 70% of the 15 year average of how much water has been in the reservoir. Last year there was 97% of the 15 year average in Melones. </p>
<p>The 2013 numbers will dictate what action to take for the next water year, which runs October 1st, 2013, to September 30th, 2014. The Mid-Pacific Region held a series of meetings to discuss 2014 with CVP water contractors, power customers, tribes, non-governmental organizations, and other state and federal agencies. Mid-Pacific Regional Director David Murillo, says; “I was encouraged by the collaboration and cooperation displayed by our customers and stakeholders during the meetings and impressed with their creative and wide-ranging ideas.” The new “Draft Water Year 2014 Water Plan” which contains a complete listing of actions and strategies, can be <a href=”http://www.usbr.gov/mp/Water_Supply_Meetings/index.html” target=”_blank” title=”http://www.usbr.gov/mp/Water_Supply_Meetings/index.html”>viewed here.</a>
</p>
<p>The CVP manages 5.1 million acre-feet of water in six reservoirs: Shasta, Trinity, Folsom, New Melones, Millerton and San Luis Reservoir. It provides irrigation water critical to 3 million acres of agricultural land in the San Joaquin and Sacramento valleys and along California’s central coast and also provides urban water for the San Francisco Bay Area. During Water Year 2013, CVP powerplants generated about 4.3 billion kilowatt-hours. Project use consumed about 25 percent of this energy and the rest was sold.</p>