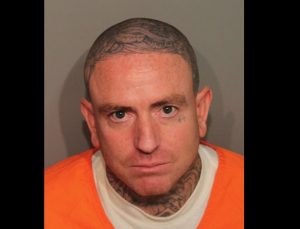 The Sheriff’s Office stated that 43-year-old Jacob Aaron Main eventually jumped out of the truck in the area of Railroad Flat Road near Noble Road, and it rolled back into a sheriff’s deputy vehicle. Despite a perimeter set up around the area, Main was able to escape. Inside the stolen truck were 60 grams of meth, 29 grams of heroin, hypodermic needles and a loaded 9 mm handgun.

The Calaveras County Sheriff’s Office has now released an earlier booking photo of Main. As you can see in the image, he has noticeable tattoos on his head, neck and face.

The Calaveras County Sheriff’s Office is asking anyone with information on Main’s whereabouts to contact the office at 209-754-6500 or call the anonymous tip line at 209-754-6030.