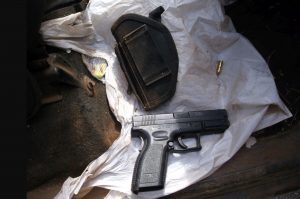 Railroad Flat, CA — The Calaveras County Sheriff’s Office says a man ran from a stolen vehicle that was filled with drugs after being ordered to pull over in the Railroad Flat area.

The incident happened during the noon hour last week along Ridge Road. A Calaveras Sheriff’s deputy recognized the driver of the 2004 Dodge Ram pickup truck as 43-year-old Jacob Aaron Main of Railroad Flat, who had an outstanding felony warrant for violating his probation. Main allegedly disobeyed the deputy’s order to pull over, and he accelerated, reaching speeds over 65 mph, and passing over the double yellow lines multiple times.

Additional law enforcement agencies were called in to assist. Eventually, Main stopped the truck on a steep embankment, jumped out, and took off running. The truck then rolled back into the sheriff’s deputy’s patrol vehicle. A perimeter was set up along Railroad Flat Road near Noble Road, and a CHP helicopter was brought in to help, but Main could not be located.

Inside the truck, which was determined to have been stolen from San Andreas this past May, was 60 grams of meth, 29 grams of heroin, hypodermic needles and a loaded 9 mm handgun.

The Calaveras County Sheriff’s Office is asking anyone with information on Main’s whereabouts to contact the office at 209-754-6500 or call the anonymous tip line at 209-754-6030.