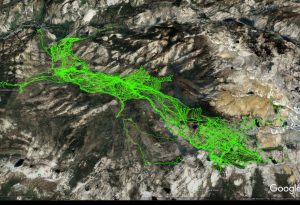 Yosemite, CA – The two hikers went missing in Yosemite National Park at the end of the summer and exhaustive searches have turned up no clues on their whereabouts.

Park officials are turning to park visitors for help to locate the two men. Park officials detail that 69-year-old Richard Judd and 31-year-old Joel Thomazin are still missing in different areas of the park. They also include the maps in the image box showing how extensive the search and rescue crews have combed the park, as can be seen by the green lines representing individual searchers, teams, and helicopters.

Judd was the first to go missing and was last seen on July 25th. He was on a day hike from his camp, near Lower Merced Pass Lake, to Red Peak Pass, as earlier reported here. Judd is 5 ft 11 in and 150 pounds with brown eyes, short graying hair, and a beard. Park officials put out the photo included in the image box, noting what he was wearing when he went hiking. They also detailed that he was reportedly using white trekking poles and had a navy-blue day pack.

As earlier reported here, Thomazin had planned a solo hike from Hetch Hetchy on September 6th to fish in the Lake Eleanor area and return on September 9th. Park officials noted that he may have decided to stay out longer and extended his trip to Cherry Lake or to the north or east as far as the Grand Canyon of the Tuolumne River. Park officials are asking all wilderness travelers north of Tioga Road and between Cherry Lake and Tuolumne Meadows to report possible sightings of him or any unattended/possibly abandoned equipment. They added that he was likely carrying the kayak packed in a large red pouch attached to the exterior of his backpack.

His family provided this list of equipment he may have had with him:

Park officials ask If any of these items are found to please leave them in place, note the location using coordinate is possible, take photos, and email the information to yosemite.search.rescue@gmail.com or call them at 209/238-7046 or call or TEXT the NPS Investigative Services Branch Tip Line at 888/653-0009.