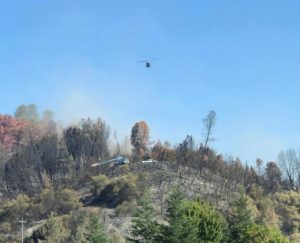 Update at 11:30am: A sign of the continued progress extinguishing the Washington Fire, the incident command structure is no longer a unified effort between the City of Sonora and CAL Fire. Sonora Fire will now manage the perimeter within the city limits and CAL Fire will manage the unincorporated areas. Fire personnel will continue to be in the fire area mopping up until there is full containment. It is 85-percent contained and holding at 100 acres.

The Office of Emergency Services reports that 18 structures were destroyed by the fire. Anyone who lost a home, and hasn’t been able to contact the Disaster Assistance Center, should call 209-533-5151, Monday through Friday. All evacuation centers are now closed, and that includes the animal shelters. The county is continuing to operate an Emergency Operation Center, so that communication can continue daily between the various agencies and first responders.

Original story posted at 7:45am: Sonora, CA — While the forward spread has been stopped for several days, firefighters gained more containment over the past 24 hours on the Washington Fire.

It is 100 acres and 85-percent contained. We reported earlier that one body was found within the burn area. Identification has not yet been made. An additional structure was recently found destroyed, increasing the total number to 18.

PG&E has been in the area repairing damaged infrastructure related to the fire.

Officials say the cause of the fire, which started on August 26 at 1:20pm, is still under investigation.