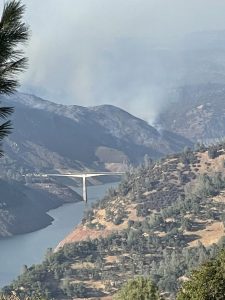 Update at 6:45pm: Below is the latest information from the Calaveras County Sheriff’s Office about the Airola Fire.

The Airola Fire is now currently at 700 acres and is 25% contained.

Road Closures will re-open at 8pm this evening

At 8pm tonight, Parrotts Ferry Rd. from Highway 4 to the South County line will re-open.

As the public begins to repopulate, please remain vigilant and watch for fire crews and utility resources on roadways.

Original story posted at 3:30pm: Vallecito, CA — While much attention is on wildfires along Highway 108, there is still concerns related to the Airola Fire in Calaveras County.

The below press release was just put out by Calaveras County government:

Calaveras OES has activated an Emergency Operations Center (EOC) for the Airola Fire, which started near the
Parrot’s Ferry Bridge on the Calaveras County side of the North Fork of the Stanislaus River at approximately
2:59pm, August 25, 2021. The fire made a hard run up slope from the river, and is currently estimated to be
710 acres with 10% containment.

The Calaveras County Sheriff’s Office have issued a mandatory evacuation order for Parrot’s Ferry from the
southern county line to Highway 4 (including portions of Vallecito), extending east to the Camp Nine Area, and
extending west to the Redhill Road area. An evacuation warning was issued for areas north and east of the
mandatory evacuation area, extending from near Grant Ln and Hwy 4 to the north, Coyote Creek Rd to the
west and Pennsylvania Gulch to the east. As of this press release, our Calaveras Alert system sent notifications
to 693 contacts, and of those contacts, 305 have confirmed receiving the message. Approximately 80 residents
are in the mandatory evacuation area.

In addition, Calaveras OES have been in contact with Utica Water and CCWD regarding critical water
infrastructure potentially threatened by this incident, and continue to partner to ensure the critical
infrastructure is protected. We have also been in contact with PG&E, who has assigned a representative to our
EOC. Current partners at the EOC also include the Calaveras County Office of Education, American Red Cross,
the Sheriff’s Office, and CalOES.