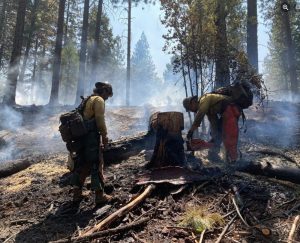 The most notable fire burning in the Stanislaus National Forest is the Hobart Fire in the Carson Iceberg Wilderness.

Smoke has been visible near Spicer Reservoir. The fire is not threatening any infrastructure. A containment line was put around the incident yesterday, but shifting winds caused it to jump, and it currently sits at 12-15 acres. Numerous snags and heavy down fuels are making suppression efforts challenging. Three fire crews and two helicopters are on the scene today working to fully suppress the incident.

Meanwhile, crews were able to successfully put containment lines around the 2.2 acre Carlon Fire near the Carlon Day Use area outside of Groveland. A crew continues to mop up today. There are no related trail closures.

In addition, there are 18 very small lightning-caused fires spread throughout the forest in isolated areas. Those incidents are being actively being patrolled, according to the US Forest Service.