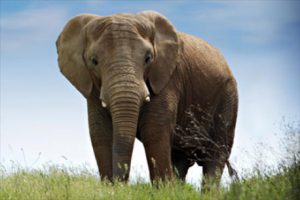 San Andreas, CA – African elephant Maggie passed away on Tuesday while surrounded by friends and while at her favorite spot at the ARK 2000 captive wildlife sanctuary in San Andreas.

Describing her passing as peaceful, Performing Animal Welfare Society (PAWS) officials detailed that Maggie passed away beneath her favorite shady oak tree and near preferred mudholes in the sanctuary’s largest habitat. Watching over her were PAWS staff with elephant friends Lulu at her side, and Toka standing calmly nearby.

“Maggie enjoyed California’s sunny skies, the wide-open spaces of her habitat, and the company of other elephants for nearly 14 years at our sanctuary. She could often be found napping on a hillside, watched over by elephants Lulu and Toka,” said PAWS President Ed Stewart. “I am honored to have cared for Maggie and very proud of the keeper and veterinary care we provided for her throughout the years.”

Maggie was born in Zimbabwe, Africa, in 1982 and captured as a calf, likely as a result of an elephant cull, share sanctuary officials. The next year she was acquired by the Alaska Zoo in Anchorage where she lived for 24 years. The last 10 as the lone tusker in the zoo. In November 2007, the zoo gave Maggie to PAWS but with no commercial airline able to move her, the U.S. Air Force stepped up and so did Emmy Award-winning television game show host and animal advocate Bob Barker. Maggie was flown aboard a C-17 Globemaster III from Elmendorf Air Force Base in Alaska with Barker footing the bill. He also funded Maggie’s care for a number of years, according to PAWS officials.

It was the Alaska Zoo’s Executive Director Pat Lampi that  PAWS officials delivered the sad news to first. Lampi had this reaction to her death, “We are all deeply saddened to learn about the passing of Maggie. She touched the lives of many Alaskans and people all over the world. I take comfort in knowing that the past 13 years she was in the loving care of our friends at PAWS and in the company of her close companion Lulu.”

Maggie lived with significant arthritis and dental disease for much of her life, with these conditions worsening over time, which contributed to her passing, say sanctuary officials. They noted that “in free-living elephants, a 41-year-old female would be in her prime, as African elephants can live to be 65 years old. In captive situations, elephants’ lives are frequently cut short by captivity-induced ailments such as premature arthritis and foot disease.”

The median life expectancy for female African elephants in captivity is only 38.1 years, according to the Association of Zoos and Aquariums. PAWS currently cares for seven elephants, including Lulu. She holds the title of oldest African elephant in the United States. Besides pachyderm, the sanctuary also rescues and cares for bears and big cats, click here for more details.

“All of us at PAWS will miss this truly special and dear elephant,” said Stewart. “She was loved by the other elephants, PAWS’ staff, and everyone who knew her or followed her compelling story, from Alaska to California and beyond.”