Too Much Information, Rescue Center Swamped With ‘Tamarack’ Sightings 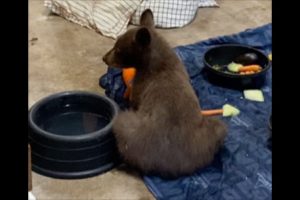 Sonora, CA – Rescue center officials have been inundated with calls after asking the public for help in locating escaped bear cub “Tamarack,” named after the Alpine County fire that burned his paws.

Officials at the Lake Tahoe Wildlife Care center in South Lake Tahoe yesterday called on the public to help find the little black bear the dug under an electric fence on Tuesday, and ran off, as reported here. Just one day later, the number of calls coming in with sightings of the cub has overwhelmed staff.

In a written statement, while thanking people for responding in the effort to find Tamarack, center officials shared, “To ensure that critical tips can be quickly received and acted upon by our team. Please only call our tip line if you have a location or sighting of a small bear that could be Tamarack.”

Tamarack is described as only about 25 pounds and about the size of a cocker spaniel dog, according to wildlife officials, who added that they are working round the clock with search and rescue tracking experts to hopefully locate the bear cub. They had one final ask of the public to “not try to search for Tamarack, as a large search party could scare him into hiding.”

There was no clarification as to whether any large community search parties had taken place.