Tiltill And Other NorCal Fires Grow 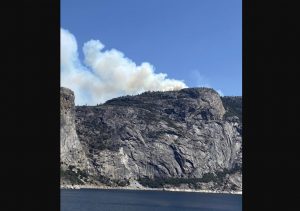 Yosemite, CA — The Tiltill Fire burning in Yosemite National Park is now up to 489 acres and there is 10-percent containment.

The fire is burning in the Tiltill Valley, north of Hetch Hetchy. Many trails in the fire area are closed. 20 firefighters are on the scene. It is by far the largest of 10 wildfires that were ignited in that area of the park by lightning between July 30 and 31. Collectively, they are being referred to as the Mather Complex fire. Most of the other fires are under an acre in size.

Of a more significant note, the Dixie Fire exploded yesterday afternoon and ripped through the Northern California town of Greenville, destroying several businesses like a hotel, gas station and bar. The town northeast of Sacramento dates back to the Gold Rush and has about 800 residents. The downtown was leveled by the fire that has burned through parts of Plumas and Butte counties. The three-week-old blaze is 278,000 acres.