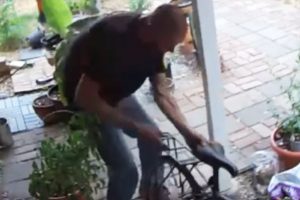 Sonora, CA – Watch the home security footage in the image box as the suspect snatches an expensive mountain bike right from the front porch of a home in Sonora.

The man caught on tape is pretty bold as he had to climb the gate to get in and out of the property on Friday (July 30 ) even as motorists drove by on Mono Way. The homeowner, with the footage in hand, reported the theft to the police.

The next day (Saturday, Aug. 31) an officer on patrol recognized the alleged thief, 40-year-old Mateusz Sasinski. From questioning and then further investigation Sasinski was arrested for the bike theft.

Police took this incident to highlight that while the footage from this home security camera was clear and crisp, some can be grainy, pixilated, or fuzzy due to poor camera quality, making suspect identification hard or sometimes impossible. The SPD notes that home surveillance footage can be a “great tool for solving crimes” but recommended that when buying a home security camera “pay attention to image quality before investing.”