Local Fire Engine Call Off Tamarack Fire But Not Back Home 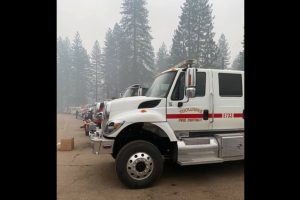 Tuolumne, CA – An engine from Tuolumne District Fire is getting a real workout as it is on the road fighting blazes in the state.

As reported here last week, Engine 733 was part of a mixed strike team of engines from several Northern California fire departments working the Tamarack Fire in Alpine County.  At that time, it was over 60,000 acres, and only 4 % contained. Currently, the lightning strike blaze is burning in both California and Nevada and is holding steady at 68,696 acres with 79% containment.

On Tuesday, E-733 was released from the Tamarack Fire but did not head home, instead, they were assigned to the largest fire in the state, the Dixie Fire. This morning’s update puts the acreage at 240,795 and 24% containment with 9 structures damaged and 66 destroyed with 323 threatened. It broke out on July 13th near Quincy and is burning in Butte and Plumas counties. The total personnel working the blaze is 5,864. This week it became the 13th largest fire in state history.