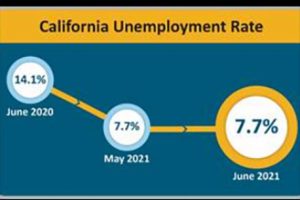 Sonora, CA – California’s jobless rate held steady at 7.7% while the Mother Lode’s increased, according to the figures released in the June Employment Development Department (EDD) report.

The hiring rate actually slowed down in June even with 73,500 jobs added in the month. That number before the pandemic would have been a huge increase, as the record for most jobs added in one month since 1990 was 98,500 jobs in April 2016. Additionally, May’s unemployment rate was originally reported as 7.9%, but state officials changed it this month after reviewing more numbers.

The Mother Lode did not follow the state’s lead as it saw an increase. Tuolumne County’s jobless rate climbed from 6.9% in May to 7.5% in June. Calaveras County’s rate also inched up from 5.4% in May to 5.8 last month.

Eight of California’s 11 industry sectors gained jobs in June.  Leisure & Hospitality continued to have the state’s largest month-over increase for the fifth consecutive month at 44,400 jobs with restaurants hiring and increased tourism.  Personal and Laundry Services also added 7,200 jobs while construction netted the largest reduction with 3,000 jobs lost due to a decrease in building foundation and exterior contractors, according to the EDD.

The national unemployment rate is 5.9%.