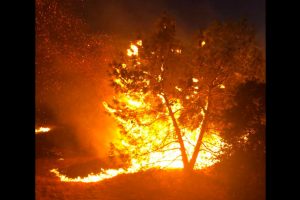 Valley Springs Fire off Highway 26 at a homeless encampment

The flames broke out in some grass along Highway 26 around 8:30 p.m., torching some trees, as can be seen in the image box pictures. According to Calaveras Consolidated Fire officials, the blaze was behind the Valley Springs Fitness Center on a hill in a homeless encampment.  They disclosed, “This is the third fire in this general area in the last couple of months.” Firefighters were able to stop the flames’ forward rate of spread at about two acres.

CAL Fire reports crews remained on scene gaining full containment and mopping up until around 1 a.m. No structures were threatened and no injuries were reported. What caused the blaze is under investigation.

Of note, just yesterday, CAL Fire released its wildfire numbers since the beginning of the year versus last year at the same time. It showed a significant rise in the total acres burned statewide, as reported here.