Spike In Acres Burned In Wildfires From Last Year 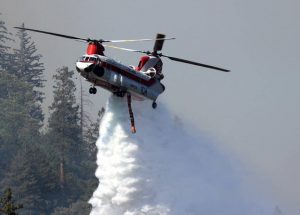 Sonora, CA —  The hot, dry, drought conditions continue to drive an increase in wildfire activity statewide, according to CAL Fire.

Friday it released the latest wildfire numbers, showing a hike of 257% in acres burned over last year at this time. The chart below shows the breakdown.

In all, there have been 275,683 more acres charred. Yesterday, Governor Gavin Newsom reported securing 12 additional firefighting aircraft for exclusive use in statewide response efforts. No details on the exact type of aircraft were released.

“Climate change is the driving force behind the extreme weather we see across the globe — creating hotter, drier conditions in Western States and contributing to unparalleled risk of catastrophic wildfire,” said Governor Newsom. “Our investments in state-of-the-art firefighting technology and equipment, along with a focus on building resilience through fuel breaks, forest health projects, and home hardening will ensure California is more prepared than ever to face an increasingly severe wildfire season.”

Within hours of getting these aircraft, nine of them took to the skies immediately to battle new and emerging fires. They join over 60 fixed-wing and rotary aircraft, making CAL Fire the largest civil aerial firefighting fleet in the world.

CAL Fire also reported that from the beginning of this year to date over 5.4 million gallons of retardant and more than 3.2 million gallons of water have been deployed statewide. During Newsom’s time in office has added resources and Cal Fire now has over 9,200 personnel, including 356 state fire engines, making it the second-largest fire department in the nation.

In April, as reported here, Newsom signed a $536-million wildfire package. The Governor boasts his California Comeback Plan invests over $2 billion to combat and prepare for wildfires and advance emergency response while also including $5.1 billion over four years for immediate drought response and long-term water resilience.