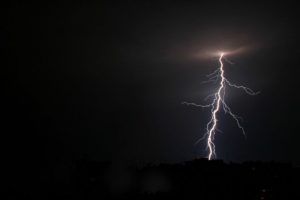 A northerly surge of monsoonal moisture today through Monday will provide a favorable environment for thunderstorm development in the mountains and the central valley, along with a high fire danger.

Scattered thunderstorms with little or no rainfall, could be accompanied by an abundant amount of cloud to ground lightning.

The combination of parched fuels and dry lightning could easily ignite new fires within the Warning area.

Gusty and erratic winds up to forty mph are possible in the vicinity of thunderstorms. A combination of the winds and the terrain could cause the rapid spread of new and existing fires.

A Red Flag Warning means that critical fire weather conditions are either occurring now, or will shortly. A combination of extremely dry fuels, gusty erratic winds and lightning associated with thunderstorms can result in extreme fire behavior.