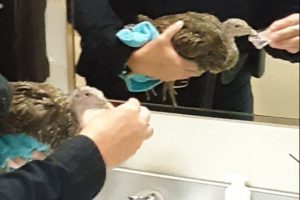 Sonora, CA – Seeing a baby turkey wandering around and stumbling into things, a concerned resident called Sonora Police for help.

The incident occurred at the end of June and when an officer arrived on North Stewart Street in downtown Sonora, she observed the little guy. Seeing that the baby turkey, also called a poult,   was in distress, it was captured and taken to the police station.

After a cool drink of water, the officer knew the little fella needed help, so to the rescue came Nina Resnik owner of Rose Wolf Wildlife Rescue. She recounted that police initially thought it was a vulture, instead it was a two- or three-week-old turkey that was in desperate need of medical attention.

“He had infections in both eyes and couldn’t see. So, he could not pick up food or water. He was super, super thin, shared Resnick.”

The rescue is a local, all-volunteer, non-profit that specializes in small wildlife. Besides turkeys, they also rescue fawns, rabbits, opossums, raccoons, foxes, and squirrels.  It’s been several weeks since the little feathered friend has been at the rescue. Resnick updates, “I’ve cleaned his eyes out and I’ve been putting medication in his eyes and now he can see really good. He can pick up feed and he’s with two others, so he’s with his own kind.”

The fowl has no name because Resnick says that makes it more personnel and harder to release the animals. However, she admits when kids come to the rescue the first thing they ask is the animal’s name, then she gives in and makes one up on the spot. It will be several more weeks before the bird will be released.

“When I got him, the first thing I did was check his breastbone. He was just a bony little bird,” remembers Resnick. She continued, “I want to make sure that he’s got plenty of meat on his little bones so that I’m not putting him out to where he is going to have to struggle to try to stay alive.”