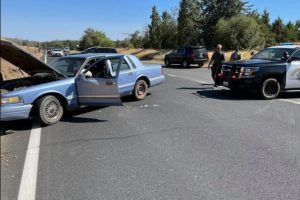 The pursuit began on Highway 140 when a sheriff’s deputy saw the car swerve over the double-yellow lines and spotted an expired registration tag. When the deputy tried to pull the male driver over, instead he hit the gas pedal.

The CHP took over the chase that reached speeds of over 75-mph on Highway 140 to Hornitos Road and Old Toll Road. The driver blew through several stop signs with one CHP officer telling Clarke Broadcasting that it was a “crazy, erratic chase” with the suspect hitting one of the pursuing vehicles at one point.

It ended when the driver tried to turn onto Highway 49 and he lost control of the vehicle, crashing into the dirt embankment, as can be seen in the image box photos. Inside the car, officers discovered a 17-year-old in the driver’s seat. Due to his age, the CHP is not releasing where he is from or his name. No injuries were reported by the CHP.