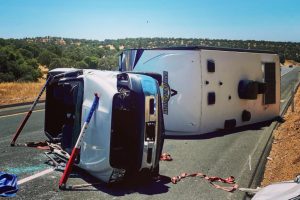 Keystone, CA – Two people were involved in a solo-vehicle pin-in crash on Highway 108/120 yesterday, that forced fire crews to use some special equipment to help one of the occupants escape the wreckage.

The collision occurred just after 1 p.m. on the highway near Tulloch Dam Road in the Keystone area, as originally reported here. The CHP updates that the driver, 63-year-old Allen Duane Ruger, and his passenger, 58-year-old Debra Ruger, both of Ceres, were westbound in a pickup pulling a 2021 Coachman trailer. For unknown reasons, Ruger allowed his truck to go off the roadway, causing both the pickup and trailer to overturned onto their right sides, recounts CHP spokesperson officer Steve Machado.

First responders on the scene included the Tuolumne County Fire Dept. (TCFD), who found the passenger trapped inside. They got to work using stabilization equipment, called Rescue 42’s, according to TCFD officials. As can be seen in the image box photos that tool prevented the vehicle from rolling over while emergency crews used two jaws of life simultaneously to remove the roof. Once off emergency crews were able to extrication the woman from the cab.

Fortunately, only minor injuries were reported in the crash. Traffic was stalled on that side of the highway for about two hours as a tow crew worked to upright the vehicles.