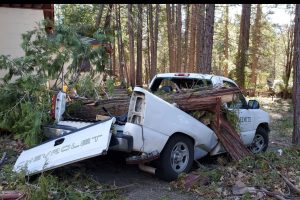 The weather event on January 18 left downed trees, road closures, power outages and damage to buildings. The declaration will allow the counties to access state funding to help recoup costs from the cleanup.

We reported earlier that the storm forced the closure of Yosemite National Park for about a week. Crews found numerous trees into buildings and park service vehicles across roadways. There was also damage to Giant Sequoias. Numerous fires were also broke out that day in the Mother Lode region, including a 70 acre fire in the Stanislaus National Forest near Camp Mather.

The emergency declaration can be found here.