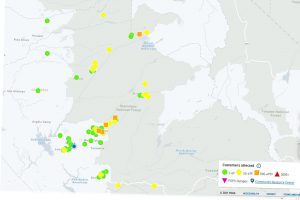 Update at 5:55 p.m.: Thousands in the Mother Lode remain in the dark this evening after the recent wind event, but PG&E crews have made progress.  The utility updates that all of the power has been restored in the Tuolumne area and a majority in the downtown Sonora area. Those that remain without electricity in Tuolumne County are mostly in Jamestown, Groveland and along Highway 108 corridor from Soulsbyville up past Strawberry. In Calaveras County, the lights remain out for those along the Highway 4 corridor from Arnold all the way into Alpine County. With the outages so widespread no estimated restoration times are being given by the company.

Update at 4:50 p.m.: Crews are battling a fire on the Stanislaus National Forest. The Abernathy Fire burning near Yosemite National Park, just west of Camp Mather. It is 70 acres in size and creating heavy smoke in the area as seen in the image box photo. Stanislaus National Forest spokesperson Diana Fredlund details, “Our firefighters are going to be monitoring the fire. They are out there right now, but as the winds die down, they expect it to become less of a concern. So, they will monitor it until it is called out.”

No structures are threatened at this time in the Camp Mather area, but there is no containment. A cause for the fire has not yet been determined, according to Fredlund.

Update at 4:15  p.m.:  Fire crews are responding to a structure fire in the Sonora area. CAL Fire reports it is located in the 20300 block of West Walnut Drive, between Eureka Drive and Racetrack Road. There are no further details at this time. An update will be provided as soon as new information comes into the newsroom.

Update at 2:40 p.m.:  CAL Fire Tuolumne-Calaveras Unit has given Clarke Broadcasting an update on fires that crews have been working on since the blustery windstorm blew into the county. Spokesperson Emily Kilgore details that crews have responded to 110 calls for service. Of those calls, 84 have been in the county and 11 were for vegetation fires. Kilgore relays, “The majority of the fires have been found to be caused by escaped debris burns. In some of those cases, those debris burns were thought to have been out by the responsible parties for several days.”

With that in mind, Kilgore says CAL Fire is asking for help from residents, stating, We’re asking all community members that have had a debris pile anytime in the past 14 days to return to the site of their debris burn and ensure that it is out and cool to the touch. Put additional water on that debris pile to prevent any further escapes.”

Update at 1:40 p.m.: Currently, CAL Fire reports that crews are working to extinguish a half-acre vegetation fire near Aarondale and Morlan roads, south of Standard and west of Tuolumne Road in Sonora.

Following the overnight wind event, Power outages are spread throughout the region. Winds are starting to die down in some areas and PG&E crews have made some progress. The utility reports that thousands are still without power across the Mother Lode, scattered in areas like Groveland, Jamestown, Sonora, Tuolumne, Mono Vista, Soulsbyville, Sugar Pine, Confidence, Pinecrest, Strawberry, and in Calaveras County in areas around Dorrington and up the Highway 4 corridor. However, the Sonora area has seen lights come back on recently in the area of Stockton Street, west of Bradford Street to Highway 108. The majority without power remain along the Highway 108 corridor from Twain Harte up and in Tuolumne. Because the outages are so widespread, it is unclear when there will be full restoration.

Update at 12:23pm Below written by BJ Hansen: CAL Fire reports that a two-story house fire on Curtis Circle in the Standard area is now contained. Mop-up will continue this afternoon.

Update at 12pm: Fire officials continue to respond to numerous incidents during the current windstorm. CAL Fire spokesperson Emily Kilgore says the most significant incident during this noon hour is a two-story house fire in the area of Curtis Circle and Baron Ranch Road. It is in the Standard area. Be prepared for activity. There are also numerous fire incidents reported in Mariposa County. We’ll continue to provide more information as it becomes available.

Update at 9:45am: ATCAA reports that it is unable to get drivers safely up to the Sugar Pine food distribution site at the Mt. Calvary Lutheran Church today. Anyone who typically picks up food there is asked to instead travel down to the Twain Harte distribution point at the All Saints Catholic Church at 18674 Cherokee Drive. The distribution site will be open from 10am-noon.

Update at 9:40am: The Tuolumne County Fire Department reports it has responded to 44 incidents since midnight. Wind gusts have been measured up to 84 mph at the Mt. Elizabeth weather station. We reported earlier that a three acre fire in Cedar Ridge, the Otter Fire, had the forward spread stopped at three acres. That is the largest fire incident reported to this point.

Update at 9:05am: CAL Fire reports that the forward spread of the Otter Fire in Cedar Ridge has been stopped at three acres. Officials continue to mop-up the incident.

Update at 8:54am: Due to downed trees in the area and heavy winds, Dodge Ridge Ski Resort is closed today.

Update at 8:25am: Yosemite National Park is closed today due to “a continuing high wind event, associated downed trees, debris, and damage to park facilities.”

Update at 8:15am: CAL Fire reports that containment has been gained on several of the smaller fires in the Mother Lode this morning, but new calls continue to come into the dispatch. The largest fire remains the Otter incident, which is three acres and 50-percent contained. It is in the Cedar Ridge area near Charles Otter Drive and Camilla Drive. CAL Fire spokesperson Emily Kilgore notes that high winds in that area continue to create challenges for firefighters on scene.

No evacuations have been ordered related to fires. If you come across a downed power line, you should call 911.

Update 7:25am: Highway 108 is back open near Sierra Parkway Road above Mi Wuk Village, according to the CHP.

Update at 7:15am: Providing an update on early morning fires, CAL Fire spokesperson Emily Kilgore reports that there are at least 10 incidents that officials are working to contain.

The largest is the Otter Fire spotted in the Cedar Ridge area off Charles Otter Drive and Camilla Drive. It is three acres and 50-percent contained. Other smaller fires have been located in areas like Crystal Falls, Big Hill, Twain Harte, Mt. Provo and North Tuolumne Road. There are no reports of any evacuations needed at this time. If you come across downed power lines, you should call 911.

Original story at 6:30am: Power outages are spread throughout the region following the overnight wind event.

Winds are again heavy in many areas this morning. Click here for more information from the National Weather Service. PG&E reports that thousands are without power across the Mother Lode, scattered in areas like Sonora, Mono Vista, Soulsbyville, Sugar Pine, Confidence, Pinecrest, Strawberry, and in Calaveras County in areas around Dorrington and up the Highway 4 corridor (scroll through image box for a map). Because the outages are so widespread, it is unclear when there will be full restoration.

Downed power lines are also believed to have sparked numerous small fires in Tuolumne County this morning. CAL Fire spokesperson Emily Kilgore says they are all under an acre in size, and located along North Tuolumne Road, Twain Harte, Big Hill and Cedar Ridge. Specific areas are not immediately clear. She says if you come across a downed power line, you should call 911.

The CHP reports that Highway 108 is currently closed at Sierra Parkway Road above Mi Wuk Village because of numerous downed trees.

There are also some school closures. Click here for the latest and make sure to refresh the school information page throughout the morning as more information comes into the news center.