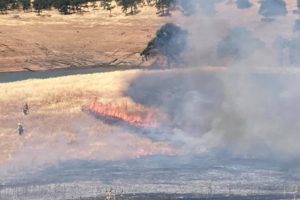 Angels Camp, CA – A two-day burn at New Melones conducted by the Bureau of Reclamation (BOR) with CAL Fire assisting used hand-thrown flares to ignite some of the flames.

The Melones BOR prescribed burn concluded Wednesday with 41 acres burned near the northeastern portion of New Melones Reservoir in the Glory Hole Recreation Area. Today’s training included the usage of various firing devices like a “Very” pistol flare gun and hand-thrown flares, as can be viewed in the image box.

A total of a hundred acres were set aflame with the first ignition on Tuesday morning near Whittle Road in the San Andreas area of Calaveras County, as reported here.