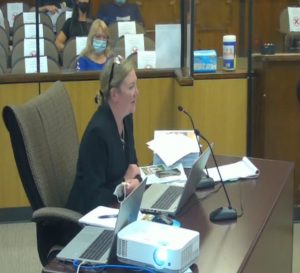 San Andreas, CA — The board of supervisors in Calaveras County picked a new Chief Administrative Officer.

Today the board voted 5-0 to approve a four-year contract with Christa Von Latta, who has most recently been serving as Interim CAO.

Board Chair Benjamin Stopper stated, “These last three to four months you have filled a void and I really appreciate the work you have done. It seems as though we have moved forward more refined and you have shown a great amount of purpose and dedication to the county.”

Von Latta thanked the board, and everyone who has helped her get to this point, adding “I truly look forward to serving. It is an incredible privilege. I look forward to working incredibly hard with you, getting a lot done, and having fun in the process.”

Von Latta had previously served as the Deputy CAO under former county leader Albert Alt who resigned this past March. She joined the CAO’s Office in July of 2017. She has a Juris Doctor degree from Fordham School of Law and a Bachelor of Arts degree from UC Berkeley.

Regarding salary, the meeting documents only state that she will receive an hourly wage of $91.42 and an automobile allowance of $500 per month to cover travel expenses. If the county uses the calculation of 52 weeks, and 40 hours per, it would translate to just over $190,000 in annual salary. Initially, the board had negotiated a three-year contract, but at the meeting, today. supervisor Merita Callaway urged the others to expand it to four years.  The other board members agreed on the spot, and so did Von Latta.