COVID Concerns Loom As Spring Break Is In Full Bloom 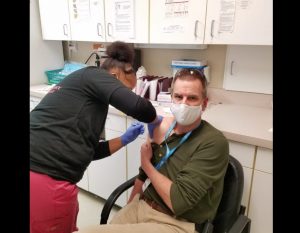 Clarke Broadcasting got an update on the situation from Tuolumne County Interim Public Health Officer Dr. Eric Sergienko who offered concerns and precautions to take during the holiday, but on a positive note, surmised that the county could move into the yellow tier in less than three weeks. That is due, in part, to the figures from this past week that allowed the county to move from the red tier to the orange tier, as reported here.

Signaling that the numbers of 3.3 new COVID-19 cases per day per 100,00 with a 1.6% positivity rate for the county that is in the middle of the tier, Dr. Sergienko noted that rate could help the county drop to the yellow tier. To accomplish that, “We need to have a case rate that is two or less for two consecutive weeks, and then a week of what we call “data lag” because we wait for a week to make sure all the data is in,” details the health officer. “So, having moved into the orange tier on Tuesday the earliest day we could move into the yellow tier would be on the (April) 20th.”

Another component that could get us to yellow is the continuing uptick in vaccinations, shared Dr. Sergienko, which got a boost after this week, after public health added 16 and 18 plus age groups to the eligibility list in the county, as reported here. Those age groups will get the Pfizer and Moderna vaccines, which Dr. Sergienko calls, hugely effective vaccines” with a good safety profiling as adverse effects can be reported online and then investigated. He added, “Any severe adverse reaction, not only are we looking at it, but the CDC would also as well. We’ve actually, in the county, have not had anything that would rise to that level.”

Also, on Friday, the state announced that concerts. theater and sports fans will be able to sit in the stands and indoor venues while subscribing to capacity restrictions based on those fully vaccinated, COVID safety protocols, and a county’s tier designation, as detailed here. Regarding whether the state is reopening too soon, Dr. Sergienko replied, “The answer may be yes. So, we should be prepared to see what happens after Spring Break and be willing to do a little back up on restrictions, if needed.”

One major concern over the holiday is people gathering. Dr. Sergienko relayed that Yosemite Park officials recounted that over the last weekend there was about a two-mile line of vehicles stretching from most of the gates, which translated into an hour wait to enter the park.

“Recognizing that there are that many people coming up here. Not only to Yosemite but the national forest and BLM (Bureau of Land Management) lands, there is going to be an increased chance of transmission,” disclosed Dr. Sergienko. “We just have to be concerned about that and we have to be vigilant and watch for any uptick in cases.”

For those working with the public, the health officer recommends getting tested four to five days after the holiday ends.

Currently, Tuolumne County is not seeing any new variances and there are no results from the specimens that were sent off by the county to check for the B117 or UK variance, as reported here. That variant is creating one disturbing trend, which could have repercussions after the holiday, according to Dr. Sergienko, who worries, “We do know it is more prevalent in Southern California, so if people are traveling to L.A. of San Diego that is an increased risk.”

One other area of concern for Dr. Sergienko, people not staying home when they are sick. With spring comes allergies and sniffily noses, but that could mask symptoms of coronavirus. He advises that people get tested to make sure before going to work and chance transmitting the virus to co-workers.