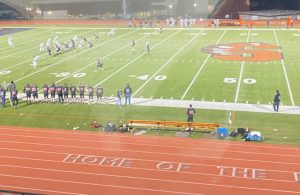 Summerville at home against Calaveras

Summerville, after winning their first game of the season a week ago, faced off against Calaveras last night. Playing Calaveras, a league team, making this only one of two games the Bears will play as a league game. Starting off,  Summerville had the ball with great field position. As the newly formed offense of the Bears took the field, QB Jaden Brocchini quickly got rushed and taken down for a sack.

Trying to get their gears rolling, Brocchini then managed to pass for 38 yards combined through three passes. One pass to WR Braylon Leveroos for 22 yards, one to WR Wyatt Frankenstein for 12 yards, and another toss to RB Kai Elkins for 4 yards. The Bears were unable to get their feet moving through the line, so they had to stick to passing. Eventually, Summerville got stopped and had to punt to Calaveras. This was the only possession for the Bears in the first quarter. Calaveras, a running offense, was unable to score in the first quarter although they did run the clock down into the second. Calaveras gave the ball back to Summerville but Brocchini threw an interception that was just shy of the intended receiver. A few minutes later, Calaveras scored but was unable to make the extra point attempt making it 6-0 Calaveras.

Summerville then controlled the second quarter from that point.  Between a mix of Brocchini running and completing pass attempts, the bears marched down and scored with only six seconds left on the clock. Brocchini started this big drive with a rush of 13 yards. The bears ran a no-huddle offense for the remainder of the drive. After the running play, Brocchini connected with his RB Tommy Warfield for a 28-yard pass completion that put them mid-way into Calaveras territory. Another completion, this time to Elkins, for 20 yards put the Bears at the ten and knocking on the door to score. Brocchini ran the ball for 8 yards and then threw a two-yard pass to Elkins for a touchdown. Somerville, still lacking a kicker, attempted to tack on 2 points and did so with a pass to Leveroos.

The third quarter started with Calaveras receiving the ball.  After a few plays, Calaveras had to deliver it back to Summerville. Warfield took over the Bears offense in the third quarter with 23 rushing yards in one quarter. Warfield was not enough to keep the Bears’ chance alive, and they gave it up on fourth down which led to yet another Calaveras touchdown. Leon Tippet was yet again a strong force on defense as he had over a dozen defensive stops.

The fourth quarter did not play well for the Bears as they started with a three and out. Calaveras gained another two touchdowns while Summerville was trying to figure out what to do. As Brocchini was limping around in the shotgun position trying to score one more time, the Bears turn the ball over to end the game. Calaveras won 27-8 in the “homecoming” game for Summerville. Hear Summerville games live on 93.5 KKBN.

Sonora had a bye-week after beating Gustine out of Merced County on the road, 33-7. The Wildcats will travel to Summerville next Friday, April 2, and will be at home on April 9 to face Calaveras. You can hear those games live on Star 92.7.

Both games are also live-streamed on mymotherlode.com.