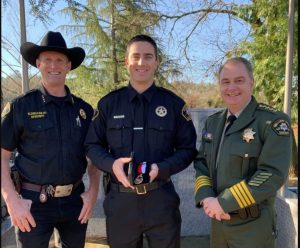 Calaveras Sheriff’s Deputy Jason Markovitz also played a critical role in the rescue, but he could not attend the presentation of the award during the March 16 Tuolumne County Board of Supervisors meeting because he had to testify in a court case.

The Calaveras Sheriff’s Office reports that the heroic actions of Deputy Markovitz and Corporal Long demonstrate their dedication to law enforcement and willingness to risk their lives to help another.

Click here to view the earlier story about the incident.