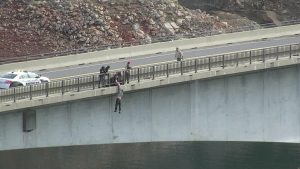 Tuolumne County Sheriff’s office reports the Sheriff’s Search and Rescue Team was able to rescue a man after he attempted suicide by jumping from the Parrotts Ferry bridge.

The report notes a tip came in just after midnight, of a male who was threatening to jump off a local bridge. With the aid of CHP, Calaveras County Sheriff’s Office and Angels Camp Police Department, both the Stevenot and Parrotts Ferry bridges were checked. Neither the man nor his vehicle could be located but checks of both bridges continued throughout the early morning hours.

Just after 3 AM, the man’s car was found near the Parrotts Ferry bridge but the man himself could not be located. At 7 AM, the Sheriff’s Search and Rescue Team, deputies, boat patrol deputies and deputies from Calaveras County Sheriff’s Office began another search of the area. Around 10 AM, the man was located on the Parrotts Ferry bridge. Corporal Long negotiated with the man for about ten minutes but the man attempted to jump from the bridge to the water approximately 150 feet down. Corporal Long was able to grab the man through the railing and hold him for approximately 30 seconds, with Calaveras County Deputy Markovitz coming to assist Corporal Long. The two officers with members of the TCSO Search and Rescue Team were able to pull the man over the railing to safety. He was taken to a local hospital but the report notes he sustained no injuries.

The sheriff’s office says, “We want to thank all of our allied agencies and the heroic work of all law enforcement personnel today. Your bravery, dedication and persistence saved a life.”