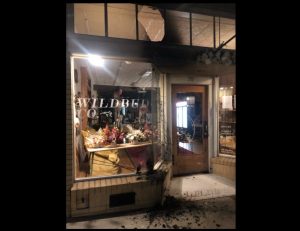 Sonora, CA — The Sonora Police Department is conducting an investigation into an early morning fire outside a flower store in the downtown area.

Police Chief Turu VanderWiel says, “The resident living upstairs smelled smoke, saw the glow from the flames, and dialed 911.  Our officers arrived along with Sonora City Fire and did not see anyone suspicious in the area.  City Fire extinguished the flames, and the owner of the business was notified about the damage.  An arson investigation is underway but details are limited right now.  We would ask that anyone with information about the fire call the Police Department.”

It appears to have been an isolated incident as no other arsons were reported overnight in Sonora.