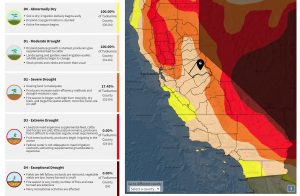 Sonora, CA — The US Drought Monitor puts out weekly reports looking at the annual precipitation levels and soil and stream conditions.

100-percent of Tuolumne County is still in a state of “moderate drought,” according to the federal agency.  This means that dryland pasture growth is stunted, gardens likely require irrigation earlier, and ponds and creeks are lower than usual.

17.4-percent of the county has now moved into a “severe drought” (along the eastern edge) This indicates grazing land is inadequate, producers will need to increase water efficiency methods and fire season will likely be longer than normal.

The US Drought monitor makes its drought determinations based on precipitation received, local stream flow levels and soil conditions.

The Department of Water Resources reported at the first of the month that the Sierra Nevada snowpack was 60-percent of average for the date. There has been additional rain and snow since that time, and more is forecasted over the next two days.