A Boost For TUD During PG&E Power Shutoffs 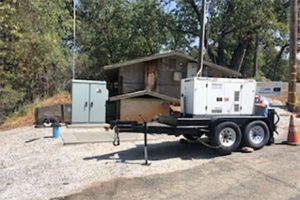 A welcome grant of $297,202 has been allocated to TUD from a 2020-21 Community Power Resiliency grant issued by the California Governor’s Office of Emergency Services (Cal OES). Those funds came from a total of $50 million allocated statewide. They were distributed to 225 recipients that covered all counties, 51 incorporated cities, 20 federally recognized tribes, and 96 special districts, one being TUD.

“Even amidst a global pandemic, we continue to prepare our state for the natural and man-made disasters that may lie ahead,” said Governor Gavin Newson. “These grants are part of our continued commitment to make sure that no Californian is left behind when disasters strike.”

The district admits it has struggled to deliver uninterrupted water and sewer services during the widespread PSPS events since the first outage in 2019 that covered its entire service area. The much-needed state funding, says TUD, is targeted towards the purchase and addition of backup power generation for critical water and wastewater infrastructure to continue reliable operations during power outages.

“Providing water during times of high fire danger and power stoppages is a critical safety priority for TUD. This was definitely a team effort and a great example of TUD saving thousands of local dollars by applying for state funding for the generators that minimize the hardship and disruption of water delivery during a power outage,” states Barbara Balen, President of the TUD Board of Directors.

Using ratepayer dollars, TUD had purchased and rented $200,000 of additional power generation in 2020 to supply backup power to its 12 water treatment plants, 55 pump stations, and 29 sewer lift stations. The grant will “extend the district’s ability and leverages ratepayer dollars to ensure ongoing reliable service during the worst of times,” according to TUD.

The grant application was submitted in October of last year, and Cal OES announced its approval on March 12th of this year.