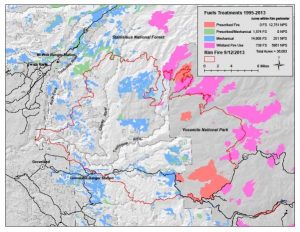 Sonora, CA — The Stanislaus National Forest has released a Rim Fire Preliminary Fuel Treatment Effectiveness Report. The report looks at different fuel treatments including prescribed burns and fuel breaks to see what effect they had on the Rim Fire.

Shelly Crook with Forest Fire Planning says, “We are looking at what was successful, why it was successful and then how can we recreate those successes into our future planned treatment.”

Crook says one fuel treatment that was successful was the fuel break line put in near the Pine Mountain Lake area. (Click here for an earlier story on the creation of that fuel break.)

“It is a long stretch of about 11 to 15 miles of fuel break that was strategically located to utilize it to keep the fire from moving into the Pine Mountain Lake community. We did see some success there,” said Crook.

Below is a section taken from the Rim Fire Preliminary Fuel Treatment Effectiveness Report. (Forest Officials say the full report will be up on the Stanislaus National Forest website in the next couple of days. It has been uploaded here as well.)

This report is intended to provide a very brief and preliminary look at the interactions between the Rim fire and a select number of areas where management actions designed to mitigate the negative impacts from wildfire and improve natural resource conditions were implemented over a period of several years prior to the fire on the Stanislaus National Forest and Yosemite National Park. Each of these treatments is designed to reduce the overall amount of fuel on site in a way that will reduce the intensity of wildfires and allow suppression options. It is estimated that over 36,000 acres of these intentional management actions were affected by the Rim fire, 17,222 acres on Stanislaus NF and approximately 18,863 acres on Yosemite NP. The following are just a few examples of what has been observed to date, recognizing that these are preliminary observations and there are hazards in drawing conclusions until the full assessment is complete. A more thorough scientific examination of the fuel treatment and wildfire interactions is ongoing and will take several months to complete.

One other note, the final report is due 90 days post control of the fire, but Crook says due to the magnitude of this blaze may ask for more time to complete it.