Tuolumne County Likely To Open Up Vaccine Distribution In April 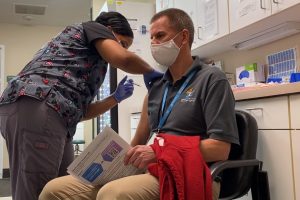 Sonora, CA — President Joe Biden made headlines last night saying he would like COVID-19 vaccine distribution open to everyone who wants it by May 1st, and Tuolumne County’s Interim Public Health Director, Dr. Eric Sergienko, says it will likely come a month sooner in Tuolumne County.

Dr. Sergienko says, “We’re actually almost there (to opening it up to the masses), and its only March 12. So, I think by the time we get to April we will be able to look at getting it into the general population. That is (defined) as people between the ages of 16 and 64 who do not have underlying medical conditions.”

Dr. Sergienko says once the vaccine distribution opens to everyone, the public health department hopes to have it fully dispersed to anyone interested by the end of June.

He says the timeline could change, but he is optimistic, based on the anticipated vaccine supply, and with more distribution clinics opening in local pharmacies.

On another topic of note, he says the state is planning to roll back its threshold for counties to move from the purple tier to red, from the current 7 new cases per 100,0000 residents to 10 per 100,000. Once that happens, Tuolumne would move to red tier as it already meets the criteria. Dr. Sergienko says there is a good chance the state will announce that the county can move to the red tier by this weekend or early next week.

In addition, Tuolumne County plans to receive a notable chunk of the $1.9 trillion federal COVID-19 stimulus.

Board chair of the supervisors, Ryan Campbell, says, “The estimates that we are getting from our state-level representatives are somewhere in the neighborhood of $10-million for this county for recovery, and we can use that to backfill certain elements of our budget, which is good.”

More information will know when the supervisors discuss the upcoming budget next month.