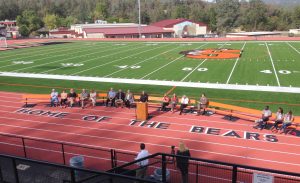 Tuolumne, CA — The Summerville Bears will open up the 2021 high school football season tomorrow on the road against Mariposa High School.

We reported earlier that there was initially a wrench thrown into the scheduling for local schools because of a state public health directive that only allows competitions between teams in neighboring counties. Both Summerville and Sonora high schools were initially planning to open up the football season against Amador and Argonaut high schools, but the plan was nixed at the last minute due to the state’s guidelines.

Summerville High Athletic Director Jennifer Osterhout tells Clarke Broadcasting that the Bears will now open the season this Friday night on the road against Mariposa High School. The following week, March 19th, the varsity team will play Big Valley Christian School of Modesto at Summerville High, while the JV team will travel to play Le Grand in Merced County.

Meanwhile, Sonora High Athletic Director Rusty Price says that the Wildcats still currently have only two games on their schedule, but officials are continuing to actively contact other schools about lining up additional games. The Wildcats will play Summerville on April 2 and Calaveras High on April 9.

The games are scheduled to start at around 7pm and you can hear all the action live on a pair of Clarke Broadcasting radio stations throughout the season. Summerville will again air on 93.5 KKBN and Sonora on Star 92.7. The audio will also be streamed on myMotherLode.com.