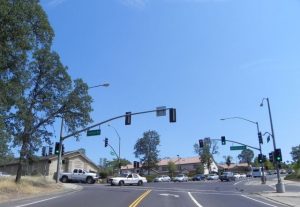 Sonora, CA — The vegetation fire on the 20,000 block of Lyons Bald Mountain Road off of Greenely Road is still at 3 to 5 acres. Cal Fire confirms the Tuolumne County Sheriff’s Office is evacuating resident in the Lyons Bald Mountain area. Cal Fire Spokersperson Lisa Williams says the fire is still 3 to 5 acres and is not growing, but stopped short of saying crews had stopped the forward rate of spread.

Update: 3:58pm fire is 5-7 acres after an hour since it was reported. Fire crews have a handle on it according to Lisa Williams. There is no time estimate for containment yet. Radio traffic was heard to say an RV was fully engulfed at the scene when crews arrived. The evacuations and road closures have been lifted.

Update 4:50pm: The CHP reports Lyons Bald Mountain at Greenley Road is closed once again. They say fire fighters have asked that the roadway be closed so they can move some equipement from the scene. There is no word on how long the road will be shut down.