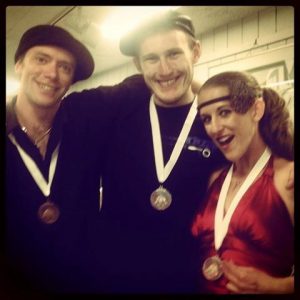 The IJA’s championship is considered by many as “the Olympics” of juggling. Performances are judged by a seven member pannel of experts. The preliminary round of competition was submitted by video in May. Only two teams from the U.S. and three teams from Japan qualified to perform in the championship.

Mountain Motion, comprised of Erin Stephens, Kevin Axtell, and Jeremiah Johnston, (all live locally and attended Bret Heart High School) performed for an audience of about 600. They were judged on several aspects including technical difficulty and creativity. Mountain Motion recieved the Bronze medal.

Stephens says she is “very greatful for the opportunities” and the valuable feedback from the judges. Stephens mentioned that one judge, Jay Gilligan, a well known professional juggler, said, “Wow that gig is bookable for any event anywhere!” and added “The coregraphy was beyond what most people have seen in juggling acts before.” Mountain Motion also performed at benifit show for the Boys and Girls club in Toledo, Ohio for about 150 kids. Stephens reports it was “really well recieved.”

Stephens reported a very high skill level among all the jugglers. She says many of the jugglers knew each other through YouTube videos but no one attended from China, likely due to limited internet access.

Mountain Motion was formed six months ago. They are looking forward to doing motivation school performances. They will also participate in many festivals including some in Mexico and Texas. Stephens also says they were invited to the European Juggling Convention. The Eurpoean Juggling Convention will have about 5,000 in attendence and will be held in Ireland. Stephens also says the group grew up in the mountains and they love it here. They have no plans on moving away from the area.