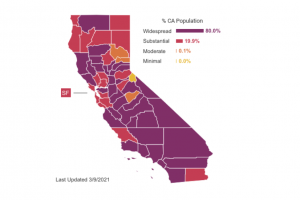 Update at 1:20 p.m.: The Health and Human Services Director for Calaveras County has just relayed the state has given the green light for the county to switch to the red tier regarding business restrictions. The move from the purple tier to the red tier will take effect on Wednesday, March 10th. The county has been in the most restrictive purple tier for three months.

Public health officials advise, “The red tier is less restrictive and allows for some business activities to resume, such as indoor dining at 25% capacity,” as the chart below details:

Click here to view the state’s Blueprint for a Safer economy page, which lists specific business information and the county’s status. They outlined the reason for the change in a written press release, stating:

“The changes come as COVID-19 cases decrease. Changes to the tier system can occur any day of the week and may occur more than once a week when immediate action is needed to slow the spread of COVID-19. Counties are required to put into place any sector changes the day following the tier announcement. The goal is to make sure patients can get the access to care they need and prevent hospitals from being overrun. Calaveras Public Health urges caution and encourages people to take the necessary steps to prevent being exposed to the virus and help the county continue to lower its risk level.”

Currently, as the state map in the image box shows, there are 34 out of the 58 counties in the purple (most restrictive) tier, Calaveras joins 19 others in the red (substantial) tier, 3 in the orange (moderate) tier with Mariposa moving into this tier on Wednesday and Alpine is the lone county that will be switching into the yellow (least restrictive) tier tomorrow.

Original post at 10:27 a.m. written by BJ Hansen: San Andreas, CA — The Health and Human Services Director for Calaveras County stated that he expects the county will receive word today that it will move to the red tier related to business restrictions. If so, the change would take effect tomorrow.

Interim Calaveras HHS Director Samuel Leach stated at this morning’s board of supervisors meeting, “According to the state data, it does look like we should be moving out (of purple) and into the red tier. That is not an official announcement as of yet, we need the state to make the announcement, but the data does show that we are eligible to move into the red tier.”

Barring any unexpected surprises, the state will make the announcement around noon today. Counties must average less than seven new cases per day, per 100,000 residents, to move into the red tier.

Calaveras County has been in the purple tier for the past three months. Leach indicated that a move to red would be a notable milestone, but stated that he does not want to be too celebratory, as many people have suffered from COVID-19, and others still are.

He said the county has been heading in the right direction for the past several months and over 12,000 vaccines have now been distributed.

We also reached out to Tuolumne County officials, who say they are not anticipating a move to the red tier announced today, but hope it will come soon.