Pitching In To Haul Trash Out And Cleanup The Community 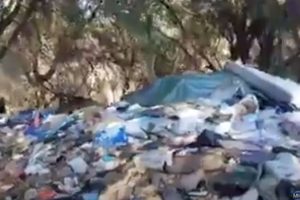 Sonora, CA – The video in the image box shows just how big the problem has become with mounds of trash piled-up at this site referred to as the Lowe’s Camp.

“It’s pretty heartbreaking,” asserts Tuolumne County Supervisor Jaron Brandon who shot the video and had to be sped up just to show the magnitude of trash left behind. He added, “I on purpose did not shoot anybody living there. These are folks who a lot of times are itinerants [transients]. They may not have created the entirety of the problem and live in very unsafe conditions.”

Brandon admits he was shocked by what he saw, but noted, “It’s a problem that seems to have been building for several years.” He was invited to the camp by the group #1pileatatime creators Jason and Trisha Revord. After the tour Brandon says, “I think we were challenging each other to think big about this problem. There are a lot of places we can start, but why not tackle a huge one to set an example for the community that if we think big and work together, we can do great things.”

Dubbed the “Lowe’s Camp,” due to its proximity to the Sonora store and visible to those traveling Highway 108 it is home to some of the county’s homeless. Brandon spent time talking to them and relaying that they need to be part of the solution.

“Seeing that there are people who want to help them and are asking them to be a part of it. I think that a really positive way to get some community pride and help them pick themselves back up and at least be able to get a clean start.”

After posting his video on Facebook, some of the comments centered around it being private property and stating that it is “not our problem why should we deal with it.” One big reason, the environment, shares Brandon, “Private property is still part of the community. Trash doesn’t just stay put, water runs through, air goes over it and there are people who live there. It affects all of us.”

This is Brandon’s first term as a supervisor, he says homelessness is “probably one of the most important challenges that we face as a community and as a county.” He went on to tout that within the first month and a half of the new Tuolumne County Board of Supervisors taking office an advisory committee was put in place. Brandon details its goal “is to create a strategic plan to set up long-term partnerships that will hopefully get these people the help they need. Looking at how do we support more housing and opportunity here and be able to help them.”

Today’s cleanup at the camp is very organized, points out Brandon, who adds the property owners were contacted, there is insurance, volunteers will get training from a certified person on handling hazardous waste and medical personnel is on site.

The group has raised over $20,000 for today’s event. Brandon lists that money goes to “dump fees, high visibility vest and PPE and gloves. It all goes back into cleaning up our community.” Any money left-over is moved to the next project.

Those who want to pitch in still have a chance to do so, as next Saturday the cleanup continues. They do not recommend volunteers under 16. Volunteers can just show up at the site or more details can be found, including how to donate, by clicking here or email 1pileatatime@gmail.com.

Brandon encourages anyone to join in the cleanup, stating, “The best thing we can do as public leaders is always seek to create more leaders and support them. I am humbled and inspired by this experience.”