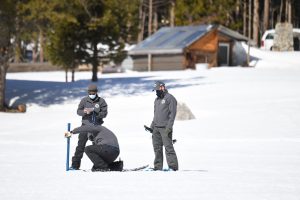 Sonora, CA – With the weather in the Mother Lode already feeling like spring California Department of Water Resources (DWR) officials have taken their 3rd annual snow survey with the snowpack coming in at less than average.

The manual survey recorded at Phillips Station near Lake Tahoe recorded 56 inches of snow depth, which is about 86 percent of average. Statewide snow survey measurements continue to reflect the overall dry conditions. Measurements from DWR’s electronic snow survey stations indicate that statewide the snowpack’s SWE (snow water equivalent ) is 15 inches, or 61 percent of the March 2 average, and 54 percent of the April 1 average. April 1 is typically when California’s snowpack is the deepest and has the highest SWE.

DWR Director Karla Nemeth stresses the need for preparation “As California closes out the fifth consecutive dry month of our water year, absent a series of strong storms in March or April we are going to end with a critically dry year on the heels of last year’s dry conditions. With back-to-back dry years, water efficiency and drought preparedness are more important than ever for communities, agriculture, and the environment.” 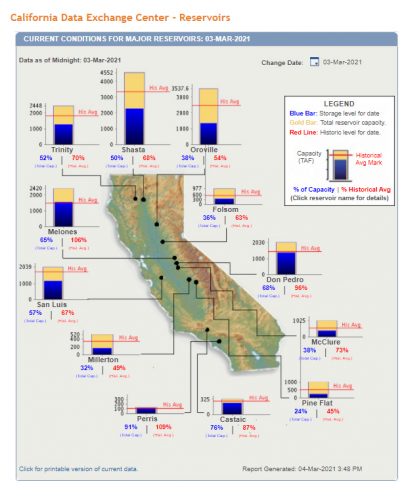