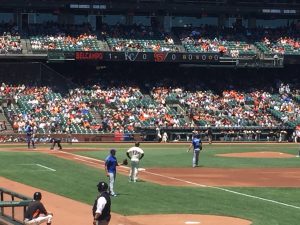 California’s major league baseball teams did not allow fans in the stands last season, but that is anticipated to change this year.

Only cardboard cutouts with pictures of fans were sitting in the seats throughout 2020.

Asked about it during a press conference yesterday, Newsom indicated that as vaccines continue to be dispersed, the state will be in a better position by early April, Opening Day for the MLB, but also stressed that residents should refrain from “letting down their guard.”

As for putting out a formal plan, Governor Gavin Newsom said, “We will socialize those conversations very, very shortly. We are working on the final details. We have been working very closely with major league baseball, others across the spectrum, local health officers, and we will be updating those guidelines.”

Newsom stressed that the changes would be related to “outdoor sporting events,” and no changes were planned for indoor events, like the NBA.

It is unclear what percentage of spectators will be allowed inside the stadiums. California has five major league baseball teams, the San Francisco Giants, Oakland A’s, Los Angeles Dodgers, San Diego Padres and the Los Angeles Angels of Anaheim.