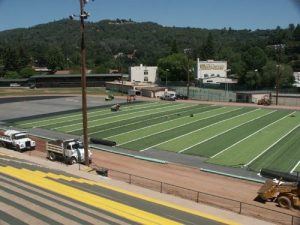 Sonora, CA — The high schools in the Mother Lode received a wrinkle this week when it comes to the upcoming football season.

The schools in Tuolumne, Amador and Calaveras worked out a plan to have competitions only among schools in those three counties. For example, Sonora High was planning to open the football season against Argonaut on March 12, followed by a bye week on the 19th, and then play Amador on the 26thth. The four-game season would conclude with matches against Calaveras and Summerville high schools. The concept was approved by the local health officers in the three counties.

However, the idea has hit a bump as the state is only allowing competitions between bordering counties, meaning that Tuolumne County schools cannot play those from Amador County. The issue was brought to light by the JPA, an insurance pool, that provides coverage for local schools.

Rusty Price, Sonora High Athletic Director, says the school is still holding out hope that the state will allow the tentative schedule to proceed (with Amador County) after officials reached out earlier this week.

In the meantime, they are looking at other options as well.

Price stated late yesterday, “For football, we are looking to schedule any school that is open right now and can play. We have reached out to a few and are waiting to hear back from them.”

Even though Merced and Stanislaus counties border Tuolumne, they are not an option, because the case rates are currently too high to allow football under the state’s directives. Counties must be averaging fewer than 14 new cases per week for every 100,000 residents. Mariposa, meanwhile, could be an option.

We also reached out to Summerville in hopes of hearing an update on the schedule. They are in the same boat as Sonora High. We’ll pass along more information when it becomes available.

When games begin, only family members living in the immediate household of players will be allowed inside the stadium, per public health directives. There will be no band, cheerleaders, or amenities like the snack shack.

Clarke Broadcasting will be airing Sonora High football live on Star 92.7 and Summerville High football on 93.5 KKBN. The games will also be streamed on myMotherLode.com.

*Tracey Petersen contributed to this story