Sonora Fire Has A New Set Of Wheels 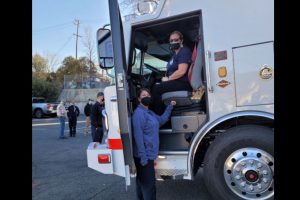 Sonora, CA – The engine pictured in the image box is the newest tool Sonora Fire Department has to battle blazes.

On Monday, the new $560,000 Smeal Type 1 Fire Engine was delivered to the Shepherd Street fire station in Sonora. It was paid for through the Federal Emergency Management Agency’s Assistance to Firefighters Grant that chipped in $$380,000. Another $100,000 was from the city’s General Fund and the remaining came from reimbursements from other agencies that the department assisted during fires outside of the city.

Chief Aimee New tells Clarke Broadcasting that one special feature is its “pump and roll capacity, which means it can drive and pump water at the same time.” She notes that still to be added, “It will also have a large high GPM (gallons per minute) flow monitor that telescopes up and down on the top of the engine.”

Sonora Fire Department covers around 4,800 residents in the 3.5 square miles of the city. It also provides emergency response and mutual aid coverage to over 50 square miles of Tuolumne County. Last year crews responded to 1646 incidents, down from 1811 in 2019, according to fire officials. They add that 1086 calls were within the city and 555 were emergency responses to the unincorporated areas of the county.  Additionally, the department responded to five statewide incidents.

The new engine will take over the workload of a 1972 Van Pelt. However, that engine will not be retired, instead, it will continue to be used for responses. The Smeal engine will start making runs in about 30 days after the required decals have been put on and it is fully equipped.