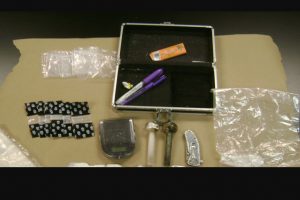 Copperopolis, CA – A Copperopolis man denied the meth found in his vehicle was his, but deputies did not buy it after they found an incriminating document.

A vehicle parked at a vista point on Highway 4 near Shirley Road in Copperopolis around 12:30 a.m. last Wednesday piqued the curiosity of a passing Calaveras Sheriff’s Deputy, who decide to investigate. A record check revealed the driver, 45-year-old Sammy Phillip High was on probation from San Joaquin County and had an outstanding warrant for his arrest regarding a domestic violence incident.

A search of High’s vehicle turned up a box, as seen in the image box, containing 9 grams of methamphetamine, two glass smoking pipes, a digital scale, 55 plastic baggies, and his birth certificate. High denied the box and the items inside belonged to him. Sheriff’s spokesperson Sgt. Greg Stark reports, “Locating suspect High’s birth certificate inside contributed to the deputies in determining the ownership of the box and its illegal contents.”

High was arrested for possession of a controlled substance for sale and drug paraphernalia, along with the warrant, and placed on a $65,000 bail.