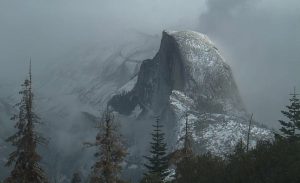 Yosemite, CA – Navigating over just a thin layer of snow with no margin for error, two skiers made the death-defying feat down Half Dome in Yosemite National Park last weekend.

45-year-old Jason Torlano and 40-year-old Zach Milligan alternately skied and rappelled down to the valley floor. They completed the descent in five hours this past Sunday. There are no reports of anyone else attempting the entire 4,800-foot descent from peak to valley. However, Jim Zellers, a snowboarder, is believed to be the first to make the trek along the 800-foot upper section on the shoulder of the dome in 2000.

In the past three years, Torlano shared that he tried to ski down Half Dome but called it off after finding unsuitable snow. After an early February storm blanketed Yosemite with fresh powder with 2 to 3 inches of snow at the peak of Half Dome, he rented a friend’s small plane on Feb. 19th. While in the air he studied the snow conditions and plotted out a possible route. He then called his rock-climbing buddy, Milligan, to join him on the adventure.

Originally, Milligan planned to just film Torlano skiing but decided to make his own descent by carefully side slipping down on skis. Milligan recounted a harrowing experience when he skied over part of one of the cables and lost control. He had to use an ice ax to stop his slide, and then right himself.